What a day! It started raining as we neared Bury St Edmunds and didn’t stop all day!  However this did not spoil the enjoyment of members who visited the cafe for coffee and lunch, visited the house and walked the gardens and the grounds.

Ickworth is a National Trust property. Its origins can be traced back to the Domesday book when it was merely one of hundreds of assets belonging to the Abbey of Bury St Edmunds. Its association with the Hervey family began three centuries later in 1432, when Thomas Hervey acquired the land by marriage. Through success and scandal, Ickworth was the family’s home for the next 500 years. 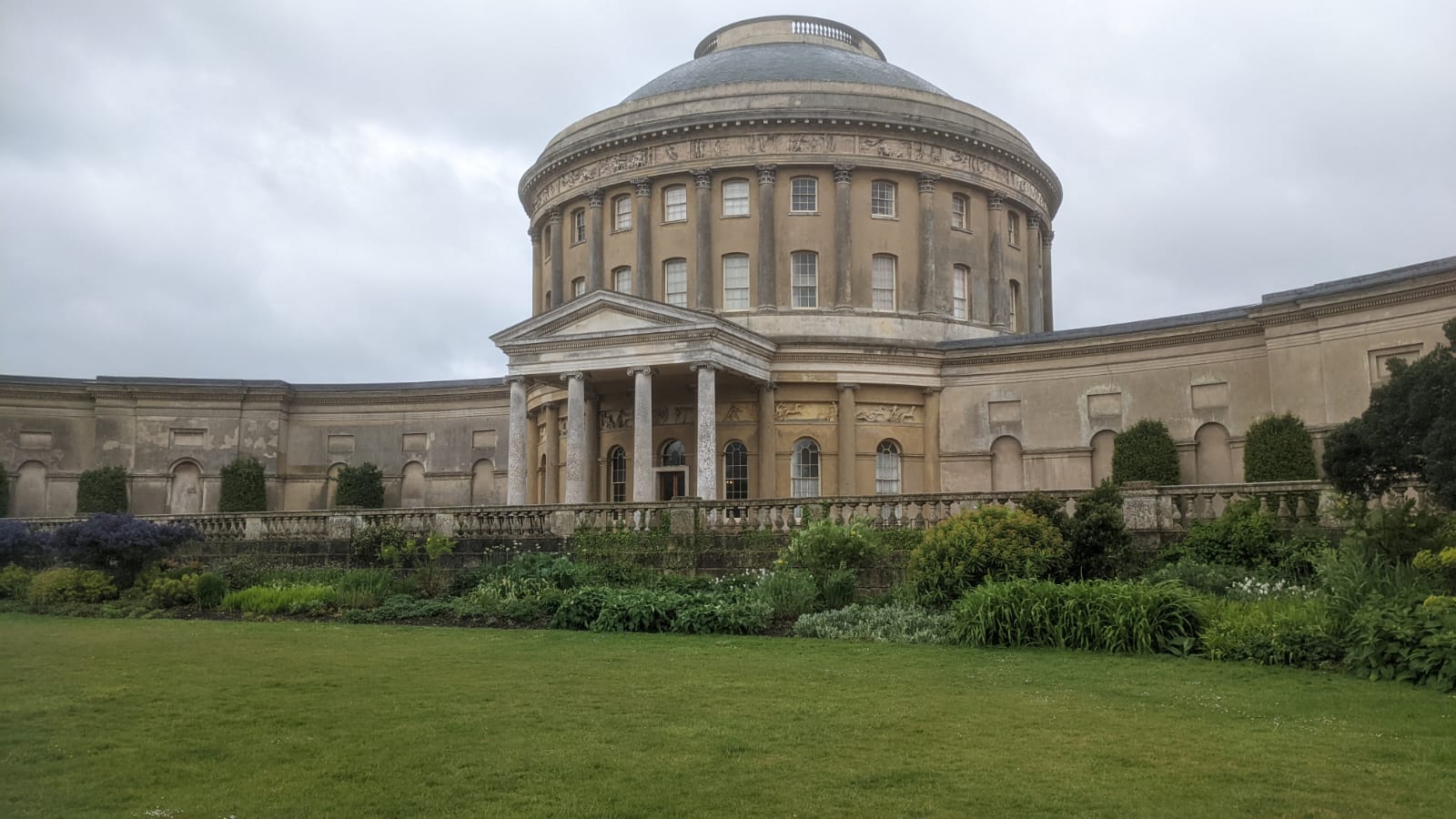 Ickworth was designed to impress.  It was built as an 18th century palace to showcase the many treasures and art collected by the Earl Bishop who despite being a third son,  inherited the Estate in 1779.  He was the 4th Earl of Bristol Started in 1795, the building was still just a shell when he died in 1803 and his son was left to complete his vision. The house has an amazing Rotunda. Nothing like it had ever been seen in this country before and even now it’s unique. The House took 47 years to complete. In 1829, the family moved into the East Wing of their (nearly finished) palatial new home. Surrounded by beauty, both inside and outside, the Herveys enjoyed Ickworth until well into the 20th century.

The Earl Bishop had spent his life travelling in Europe and secured a vast collection of art and treasures. There is a wonderful collection of pictures…Titian, Reynolds and Gainsborough being amongst the artists and there are some fine sculptures.  The silver room houses the largest collection of silver within the National Trust and has some wonderful examples of how the wealthy wined and dined.

The Hervey’s tenure at Ickworth came to an end in 1956 when the 4th Marquess presented the house and estate to the Treasury in lieu of death duties. The Treasury passed Ickworth to the National Trust.

The Italianate Gardens and Stumpery were explored in the rain and we only wished we had seen them in sunshine!

The first visit since March 2020 took place on Wednesday 20 October when a group of the Friends travelled with Flagfinders coaches and our special driver, Paul, to Sutton Hoo near Woodbridge. 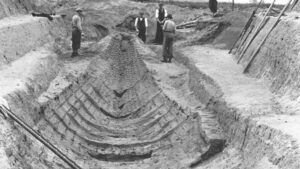 Masks were worn on the coach and single travellers allocated two seats so distancing was observed.

Sutton Hoo is home to one of the greatest archaeological discoveries of all time. 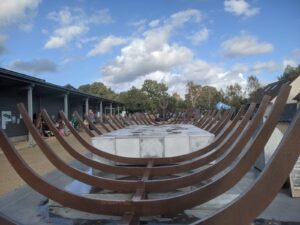 In 1939, burial mounds in the grounds of a property owned by Mrs Pretty were excavated by Basil Brown, her gardener and amazingly the great ship burial was discovered. Other mounds had been previously dug and looted, but this was the most amazing discovery of the century. The mound he excavated was a royal burial ground, the final resting place of an Anglo Saxon king with his treasured possessions, Because of the imminence of World War II, Mrs Pretty made the generous decision to donate all the finds to the British Museum. 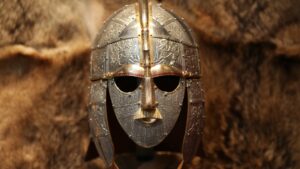 The site is cared for by the National Trust and recently they have made great developments. A 17 metre tall viewing tower has been erected opposite to the burial mounds and from here it is possible to get a real bird’s eye picture of the site and the proximity to the River Deben from where the ship was dragged to its final resting place. 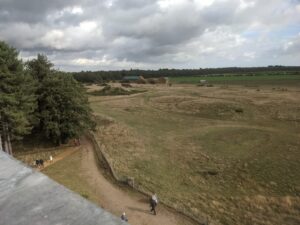 Birds eye view from the tower 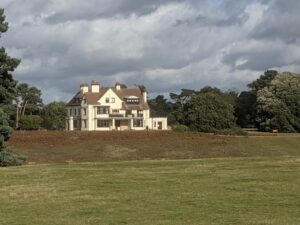 In the courtyard, a full size sculpture of the ship has been erected which really gives an understanding of the size and the importance of the finds. The High Hall exhibition contains replicas of many of the treasures, including the iconic helmet, the gold belt buckle and a patterned sword. In Mrs Pretty’s home, Tranmer House, there is an exhibition to show various digs and excavations that have taken place at Sutton Hoo.

We were blessed with a mild sunny day and the opportunity to catch up with people who we had not met each other for over a year.

Each year, an extended tour of five days enables us to visit places of interest too far away for a day visit.

In April 2022, we visited Derbyshire, with Buxton as our base.  This was the Tour originally booked for September 2020 and then postponed to September 2021.

On a sunny morning in April, 25 members of the Friends set off with Flagfinders Coaches and our special driver Paul, for our long awaited tour of Derbyshire.  We broke our journey by stopping at Barnside Gardens. 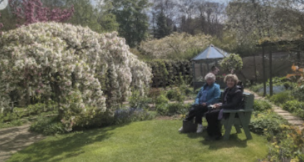 These gardens were started in the 1950s by Geoff Hamilton who will be remembered by many as the presenter of the first BBC Gardeners World series. He established the gardens as the programme developed, and now there are 38 gardens all on different themes, displaying different types of gardening. We were welcomed by Nick Hamilton, Geoff Hamilton’s son, so we felt quite privileged!

The journey continued to the Lee Wood Best Western Plus hotel in Buxton. There we had the warmest of welcomes from very helpful staff and were able to soon settle into very pleasant rooms. The meals in the hotel that and every night were excellent and we were not surprised that they hold an AA Rosette!!

The journey over the Moors the next morning past the Cat and Fiddle Inn to Macclesfield and the Macclesfield Silk Museum and Paradise Mill, gave us lovely views of the surrounding beautiful Derbyshire countryside. 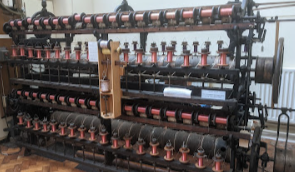 Paradise Mill was just as it had been left when work finished there in the 1980’s;  all the looms and all the machines, exactly as they had been left. Our guide Daniel was passionate about  his involvement with the mill and gave us a fantastic tour demonstrating the machines and showing us exactly what life would have been like in those days.

Afterwards we were treated to a fantastic lunch provided by the museum staff. It was a lovely visit and I was so pleased to hear from Travel Editions with whom I  worked to book the tours, that the mill were delighted with us as a visiting group!  They said that we  were the best they’d ever had and were delighted with the  round of applause we gave them at the end. The afternoon was free for people to explore  Buxton as they wished.

The next day was spent at Chatsworth. The Duke and  Duchess of Devonshire are moving out of the house next year and so have arranged an exhibition of some of their special treasures. These were displayed around the house in the traditional rooms. The grounds were  a joy to see as was the sculpture of a horse which came to life every hour! 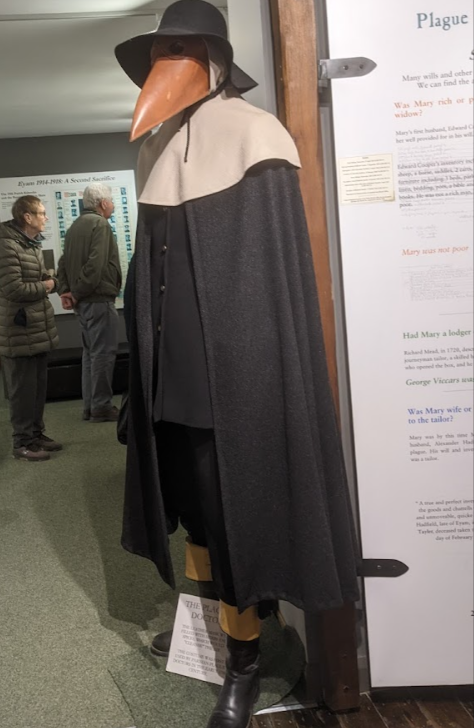 On the last morning we visited Eyam , known as the plague village. The comparisons with our recent COVID situation and the situation that the villagers of Eyam  faced in the 1600s are quite remarkable. Most of the group walked through the street seeing the information boards on the houses where so many of the villagers died. One woman, Mrs Hancock, buried her husband and six children within four days. We moved on to Bakewell for lunch but nobody was tempted to buy a Bakewell tart or Bakewell pudding! 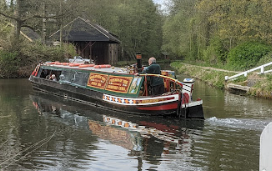 The afternoon came to a gentle close with a cruise on the Cromford Canal in a restored narrowboat. It was lovely drifting silently along past nesting Canada geese, watervoles and mallards and  several little dabchicks. 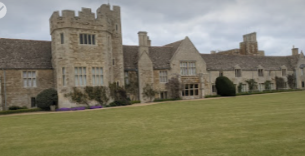 We said our goodbyes to the staff and began our journey home, stopping at Rockingham Castle near Oakham for lunch and for a tour of the castle and the gardens. After spending time in the lovely gardens we were glad to continue our journey arriving back in Braintree tired but happy after a very successful few days away.