Saatchi Gallery for the exhibition – Tutankhamun Treasures of the Golden Pharoah

On March 11 2020, a group of 43 members of the Friends embarked on a journey to London to visit the Saatchi Gallery and see the much praised exhibition, “Tutankhamun, Treasures of the Golden Pharoah”

It was a bright sunny day and we were able to enjoy and appreciate the London buildings as we moved slowly in the traffic. The streets were however remarkably empty of people with the travel restrictions imposed by the Coronavirus situation already affecting tourism.

Staged to celebrate almost 100 years of the tomb discovery (1922), some of the artefacts on display had not been out of Egypt before.  Everything was well documented and because many exhibits were in central display cabinets, it was possible to walk around them and get quite close. Information was given above the displays and in several places short videos enhanced the understanding of the artefacts. 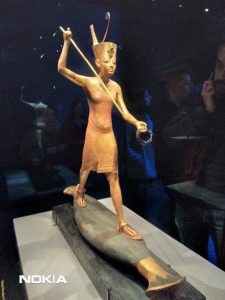 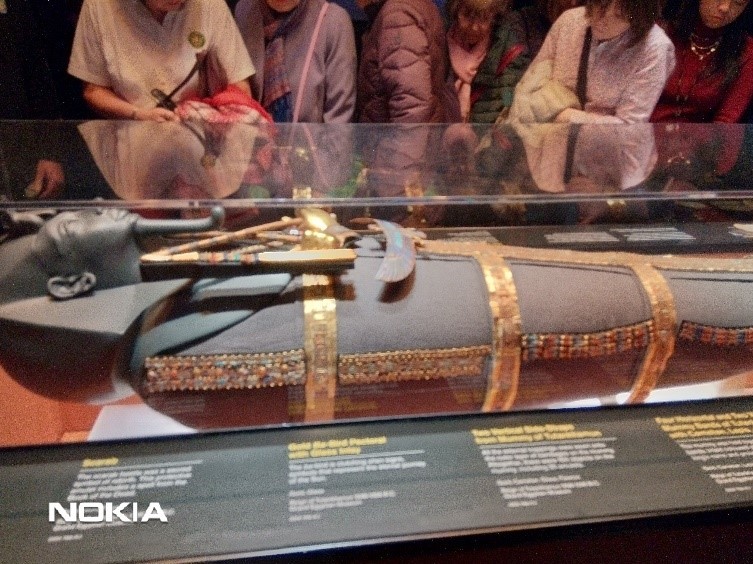 When the tomb was opened and Howard Carter saw the extent of the contents he must have been totally overwhelmed. Over 5,000 beautiful, richly coloured and decorated artefacts had been buried with the 19 year old king when he died to accompany him on his journey to the afterlife. These included a solid gold coffin, face mask, thrones, archery bows, trumpets, a lotus chalice, food, wine, sandals, and fresh linen underwear.  The exhibition told the story of this journey.

Servants were in attendance and there were large containers which held food for the journey. There were bows and arrows, so he was prepared for attack. Many small icons were buried with him and the most beautiful gold and colourful jewellery. Chests were decorated with hieroglyphs and one of the final exhibits was the sarcophagus.

It was an exhibition which showed a wealth of opulence and beauty.  It was difficult to comprehend that these artefacts were over 4.000 years old and yet the craftsmanship was intricate and exceptional. It was a truly memorable visit.

In October 2019, we undertook the Friends’ seventh extended visit; this time to Devon.

We stayed at the Ilsington Country House hotel which was on the edge of Dartmoor and very comfortable. The restaurant has two AA Rosettes so we were served some excellent meals. Our group of forty filled the entire hotel so it was a very happy house party! The swimming pool was well used too!

Each day we travelled to places of interest in the area. A Red Coat city guide accompanied us on a tour of Exeter and we then enjoyed the rest of the day at leisure.

The next day was called Round Robin. We started in Paignton and journeyed on a steam train to Kingswear from where we took the ferry across the River Dart to Dartmouth. A couple of hours in Dartmouth enabled us to explore the quaint narrow streets and alleys all bedecked with flowers. When the tide was right we embarked on a boat for an hours leisurely journey up the river to Totnes. The sun shone and it was clear why this area is termed the Riviera!

Roadworks and a closed road over Dartmoor necessitated a change in plans on our fourth day. However we still enjoyed the calm and peace of Buckfast Abbey. It is hard to conceive that an abbey of such proportions was built by only six monks at the beginning of the twentieth century.

On the return journey we stopped in Swindon where a retired engineer showed us around  “Steam”, the museum of the Great Western Railway. Housed in the old railway sheds, there are life sized mannekins as well as several locomotives. Although there was a shopping outlet in an adjacent building  I don’t think anybody was tempted!